25 is the name of my next novel. For those of you who don’t know, my original novel, which I never came up with a name for, received rave reviews. Well, 1 rave review and one “Oh, it was so-so, I think you could have done better review.” We’ll call that a 7 out of 10.

So thus far I’ve only written the general outline, prelude, and this little bit of the first chapter. Fortunately, I already have the cover design finished, so that’s a bonus. 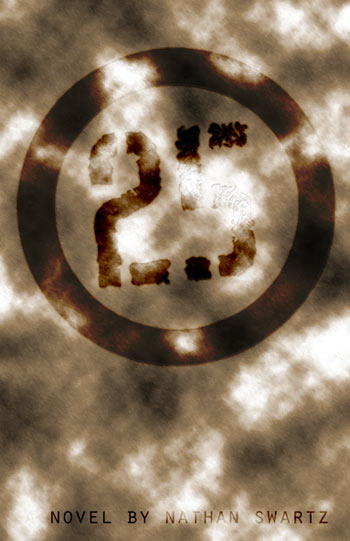 It was sometime around 7:36 on a Thursday evening, while sitting at the Plymouth Bar & Grill and courting the cool blue swirl of a cigarette and the swilling clean sharp of a martini, that T.W. realized that wearing different colored socks under his suit wasnï¿½t going to save his soul from the wretched entrenchment of the modern day advertisement. Therefore, he stood up, quit his job without telling a soul, and headed south on Interstate-79 in search of the simple necessity he had been searching all of his life for, his right and privilege, and that of every manï¿½to live in the world rather than just on it.