Sometime in the not so distant future

Today comes cracking through the window pouring gold rays and reflected green and blue light all over the face of a young woman, convincing her that it’s time to slip out of sleep and experience another fine Autumn day.

She slides slowly from behind the thick covers, those weighty sheets that have held her so gently through dream or toss and tumble, and moves to open the blind on the window as wide as it will go.

In the small courtyard visible through the window is an amalgam of various weeds, some of which are flowering and others scratching their way up the stone and wooden walls of the outer perimeter. A single chair sits in the corner, half in the shade of an old shed and half baking in the glow of the big holy sun. A man, approximately the same age as the young woman, is sitting on the chair, his right leg propped up on his left and scribbling incessantly into the old worn notebook on his lap. Every now and then he looks up, at the sky or the trees or a passing bird or a bird sitting on the fence, but usually at nothing at all in particular. The third time the girl sees him look up, he does so at the window she’s peering through.

The girl ducks from the window and the boy puts his head back down, continuing on at what he was doing. Completely emersed in writing and scratching and drawing and writing some more, he doesn’t even notice her as she slides up to the grass beside him and sits Indian style at the base of the chair.

Her eyes pour over his every movement as he fiddles with the corners of the book, chews on the tip of the pen a bit and then proceeds to furiously write another few lines. Every now and then he draws on his shoe. Suddenly, he reaches into his pocket to find his cigarettes and looks up to find the girl, with her head in her hands, looking up at him. She’s almost as surprised as he is.

He tosses the book to the grass and leaps at her, remembering that it wasn’t to write in books that he came here in the first place. 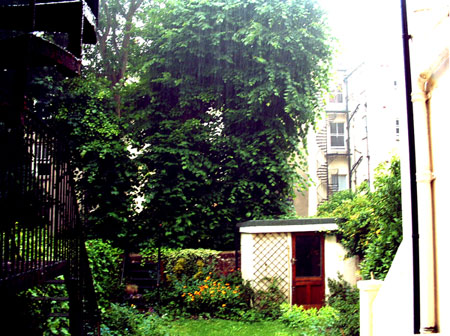 Up Next: A message from a viewer...