The incessant constant murmur of whining children, twelve hour, unpaid workdays, and a holiday reminding us all of how much young life has been wasted on an ignorant, near-illiterate Texan has me longing for adventure-time. This year the African and I are planning on pushing peddles down the West Coast – starting at the home of the football team that lost to our city’s football team (I think they’re called the Seagulls) and heading just far enough into California to keep the hippie / plastic surgeon ratio in our favor. Here’s a digital image of the general idea of the ride, though we have no plans to make any real plans. Just sort of show up, rent bikes and go… 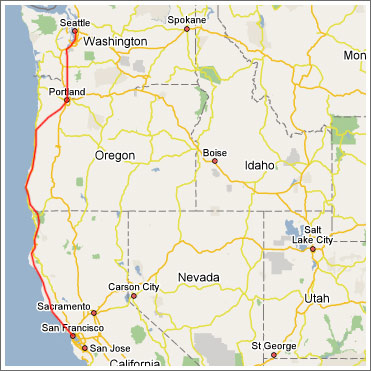 Up Next: Archiving my Problems