iHome, Complete Media for all of the Rooms in Your House

So we recently upgraded our living space from a small two bedroom, living room/kitchen combo to a two story + basement townhouse. We’re not living in a mansion by any means, but we are now spread out enough that turning up the volume on my MacBook just doesn’t rock the house, as they say.

So I’ve been browsing through the Apple Store, thinking about a way to get all of the sights and sounds from my laptop to the various rooms in the house. Primarily, it’d be nice to be able to stream video to the TV in our living room, as well as the future possible TV that will find itself in our basement (which will be converted into a Wii Room, I do believe); I’d also like to have speakers in said Wii Room as well as in the kitchen (which would theoretically provide enough sound for the back deck as well.) This is something I’ve been thinking about for years, but only now do I make enough money and have enough faith in WiFi to see this actually becoming a reality.

Below is a custom diagram I’ve developed to help you &em the reader &em visualize what I &em the inspirer of dreams &em have concocted in my head. Please do feel free to shut down any of my ideas in the comments section, as they’re untested and therefore not officially feasible. 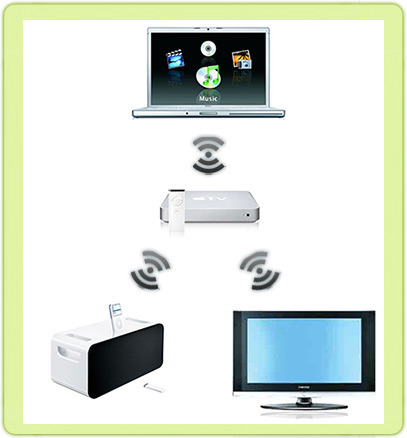 The Mainframe is made up of my MacBook Pro. I’d prefer to have something like a Mac Mini or even just a cheap PC to act as a media server, but for now we’ll stick with the MBP (after all, it’s the only piece of the pie I actually own, so I might as well not dream too big.) Here is where all of my music and movies (which would be ripped from my existing DVD collection, or downloaded as illegally as possible and converted into something iTunes can handle) and pictures would reside. Another reason it’d be preferable to have an alternative storage device is simply that my laptop is my work machine, so if I were off at a coffee shop or something, no one at the house could watch movies or listen to the music on it. Plus, it’d theoretically have to be powered up indefinitely so that all I’d need to do in order to watch a movie would be to pick up an Apple Remote and push play. If I physically have to find my laptop and power it on, that sort of defeats the purpose of having a WiFi-streamed up house, eh? Of course, the downside is that I’d have to deal with keeping my laptop and the server synced, as I’d be more likely to download/rip songs and music to that machine than some server stuffed in some corner somewhere.

The Media Center would be an Apple TV. At first, I thought that Apple TV was just stupid – who wants to pay $10 for a movie from iTunes Store, a movie that isn’t even HD quality, just so I can stream it from iTunes to Apple TV. Then I realized that I can rip my DVDs to iTunes, so basically any video I could get my hands on, I could theoretically convert it to something-iTunesy. I’m still considering using a Mac Mini to replace the Apple TV (and essentially act as the Mainframe mentioned above) but while it appears feasible to use a Mac Mini as a Media Center, the built in hard drive maxes out at 80GB, which doesn’t seem large enough to house a serious collection of video, music and pictures.

Audio Points would be controlled using the iPod Hi Fi, which doesn’t actually require an iPod (though it would be cool if they’re compatible with my iPhone, for the occasional occasion where I just want to plug that in and press play) and can plug directly into Airport Express with AirTunes. At that point, I should be able to easily set my music to shuffle through my entire iTunes collection, which is what I typically do when playing music at my house anyway. Of course, it’d be cool to have some little display at the Audio Points, but that’s not actually a huge deal for me. One of these in the kitchen, one in the basement.

Video Points would simply be a couple of televisions, one in the basement &em which would double as the display for the Wii &em and one in the living room for comfie familial viewings of classic hits like Saw 4: This Time it’s a Hammer and Shrek 9: Judgement Day.

At that point, I think the only thing left is for someone to hack the iPhone so that I could use it as a remote and stream anything on it to any of the Audio or Video Points.

And yes, I did have a lot of time on my hands this evening…