I remember reading, years ago in a Popular Mechanics magazine, of a car that looked extremely futuristic at the time which could theoretically get 100 MPG. I can’t remember if it was a prototype or just near-to-fact-fiction, as much of what Popular Mechanics writes about is, but it was the first time I realized that different types of cars could get more bang for your buck when it comes to filling up the tank. I was 16 or so and still had no license, so I grabbed my skateboard and the thought became more background fodder in my brain.

Recently I’ve had the pleasure of driving a Toyota Prius, two actually, both owned by FlexCar – the car sharing company based out of Portland which recently started dropping cars all over Pittsburgh. Aside from the sheer fun of driving the thing – it’s shaped like something out of Dark Angle, the key is just a plastic square and you push a “Power” button to turn it on, the gear shift is more like a joystick and there are secret compartments and power meters galore – it turns out to be the most enjoyable driving experience of my life, second thus far only to when I was given a free 2005 Mustang to drive across the country a couple of years ago and the Mini Cooper, which feels exactly like what it looks like: driving a Matchbox car.

The Prius’ most alluring feature is the large video display that handles just about everything the typical dashboard console does in other cars, with this model (I’m assuming it’s the standard, bottom of the range model) sporting four buttons to activate different displays: Climate, Audio, Display and Info. 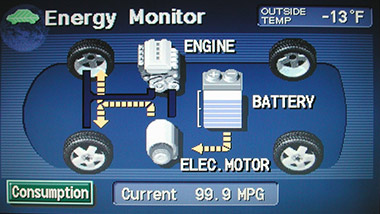 The Climate screen allows you to set the temperature you’d like it to be in the car, the fan speed and what direction the fans should blow (on your legs, in your face, etc.) Then the car does the rest of the work, doing its best to keep it at whatever your preferred skin temp is. Audio does what you’d expect, allowing you to control the radio, CD changer, etc., but it also shows you a list of about 8 stations available to you and any digital text that the station sends along: call letters, the station’s name, what song is playing, etc. I didn’t delve into Display, but it seems to be a sort of “Settings” function, where you can adjust screen brightness and the like.

Info, however, is where this car really shines. There are two screens that you can switch between in this mode: MPG/KW generated and Power Consumption. The first screen shows two charts, one with your current miles per gallon and one that shows you what your MPG was in 5 minute increments for the past 30 minutes, so you can see how you do over a long stretch of driving, while at the same time showing you how much electricity you’ve generated just from driving the car (it generates electricity both from fuel use and by grabbing any excess energy coming from the momentum of the tires when you’re coasting, in non-scientific terms). It also shows our average MPG over a period, which was typically 45 MPG or more for me.

The second screen is the bomb, and my favorite feature of the car altogether. It’s an image of your cars power generating systems, namely, the engine (which runs on gas), the electric motor, the battery, and the front wheels (it shows the back wheels too, but they don’t generate power).

If everyone’s cars were based around this technology, we’d all be a good deal richer, have a cleaner world, and driving would just be more darn enjoyable.

Up Next: Pittsburgh Needs a Hostel