Last year I conquered Squirrel Hill on an every other day basis in an 8 mile loop from Shadyside, over the hill, into Oakland and back. But alas, those were different times and in recent months I’d fallen out of shape and determination. Of course, a still sparkling New Year has relieved me of such burdens, and I’m back on the bike (just in time for Winter). This morning I decided to once again make headway into surmounting Squirrel Hill and injecting a healthy dose of “holy fuck!” into my lungs.

There are essentially three ways of getting into Squirrel Hill from Shadyside, all at about 1 mile in length: Shady Avenue, a stretch of winding road that takes you rollercoaster-like up and then down small spots, only to climb back up again; Negley Avenue, which has a short but steep (15.8%) grade, meaning that for every 100 feet forward you go, you’ve climbed 16 feet in elevation; or Murray Hill Ave, which is still a brick road, and the sidewalks – though unfrequented by pedestrians – are narrow, busted up and often completely blocked by yard construction or people’s garbage cans.

I chose the latter. It’s a steep hill and every bumpy brick that you find yourself forced off of the sidewalk and onto remind you that you’re not just pushing uphill, not just pushing a bike uphill, but you’re pushing a bike uphill and over every single brick between 5th Ave and Forbes. My lungs were absorbing the frigid January morning air at a rate I can’t remember, having quit smoking about two weeks ago I feel completely satisfied at the proposition of some sort of progress, even if my legs and heart are screaming hell at me as if to insist that if I’m going to continue this bike riding lifestyle I need to quit taking off huge months at a time where my muscles are allowed to mush and get comfortable in the knowledge that the most they’ll have to do is walk a block to Crazy Mocha and sip tea all day. But after a certain point, a certain amount of trudging, traversing and reassuring my mind that I will certainly not be turning around to coast back down the hill (the bumpiness of a downhill brick ride like this would likely be as difficult as the climb), I eventually let the concentration of the work slip to the back of my mind and the music from my headphones fills in the gaps between those thoughts and whatever new ones might pop up, whatever morning daydreams can get me through starting the day. Dreams of gypsy RV summers and weekend escapades and a soon coming cruise to the Caribbean make up the day as herds of squirrels dart up and down trees, peaking through leaves to determine my threat level like little George Bushes on overtime. Soon enough, I’m at the top of it all and even coasting down a little.

My bike lock, a little yellow thing – with a name like Bulldog or Biterbull or something – finds itself clamping around one of the Three Rivers Bike racks and the frame of my Fuji and within minutes I’m in the 61C Cafe, buzzing with the sounds of cappuccinos and Sinatra on the radio. The pain that had been in my thighs slowly drips down through my calves as they’re no longer needed to pull the full weight and I slip into some rooibos.

Everyone in the cafe is alone, four or five people all sitting at separate tables and facing forward, out the large front window. They all remind me of unpopular school children who’ve elected to come in and take their seats at homeroom rather than mingle for a few extra minutes in the hallway outside. The oldest of them, white hair and thick beard, drinks a coffee as he draws scribbles and masterpieces all over a few napkins. The day ensues… 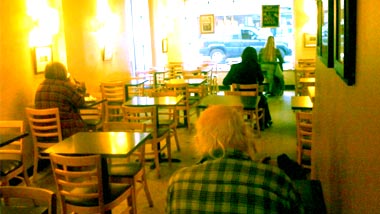 Up Next: Pittsburgh Drink Tax