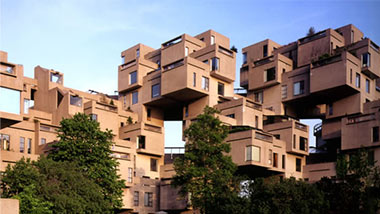 Each one of those blocks you can see in the pic above (and in much better detail at the actual site), is an apartment, all stacked on top of each other. Some 148 singles, couples and families call the Canadian architectural masterpiece home, which lies along the Old Port of Montreal, adding riverfront prestige to the futuristic lifestyle such a place seems to afford.

I’ve been really into the idea of housing built on top of housing for a long time, seeing it as not only uber-hip, but also as environmentally conscious: better to build into the sky than spread out across land.

Up Next: The Government is Abusing its Business Expenses, Bigtime