8 Ways to Be a Better Person, Sketch a Woman Nude, Look Better on Radio and Finally See Bigfoot 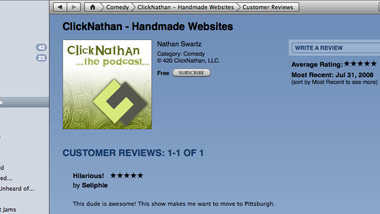 For those of you who read the blog, and thank you very much by the way, but haven’t yet had the chance to listen to my podcast, simply and beautifully titled “ClickNathan the Podcast”, perhaps you don’t know what you’re missing, eh?

So please, stop wasting time rereading this post and just listen to the first episode already.

And if you’re still not convinced, take the word of Seliphie, who left the only (raving 5 star, I might add) review on iTunes:

This dude is awesome! This show makes me want to move to Pittsburgh.

Up Next: More on Politics? Give me a break, Mr. Spacely