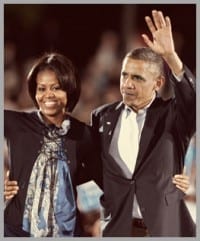 The primary elections are kicking off as soon as January rolls around. While it’s the Republicans who are battling it out amongst themselves to see who will have a shot at being the biggest contributor to segregated wealth, racism, pollution and fighting against the original American Dream*, you can still donate to Obama’s campaign this time around, too, since technically he’s running at the moment to be the Democratic Candidate even though he’s also the incumbent president. I know, it’s weird, but anyway, if you want to give a $10 or so, you can do so using the link below.

I personally endorse Obama. I think he’s got a great smile and the anecdotes about him playing basketball with members of his staff really touch my heart! But seriously, he didn’t turn out to be the Black Jesus, but he’s still done a decent job to date. He’s kept more promises than he’s broken or compromised on, and he primarily speaks the truth. I say we do as much as we can to give him another four years to finish the job before we go back to the same old bullshit from guys who all look and come from similar backgrounds (the same ones our last President W. came from).

* There is a well known American Dream that has something to do with a white picket fence and two kids and/or two cars in the driveway. The real American Dream is simply to be able to live free and have the opportunity to succeed based on ability and achievement, not a predetermined path through life based on economic status at birth. Currently this country rewards the already rich and punishes the middle class by making us pay for the greed of the uber-rich. That is not an American Dream. That is a concoction drummed up by Reagan that assumes that if you give the rich a break, eventually that break will “trickle down” to everyone else. Thirty years later, we’re not getting trickled on, just pissed on. Obama wants to stop that shit, the Republicans put the middle class up for hostage whenever he tries to do just that.

Up Next: All in a Tif