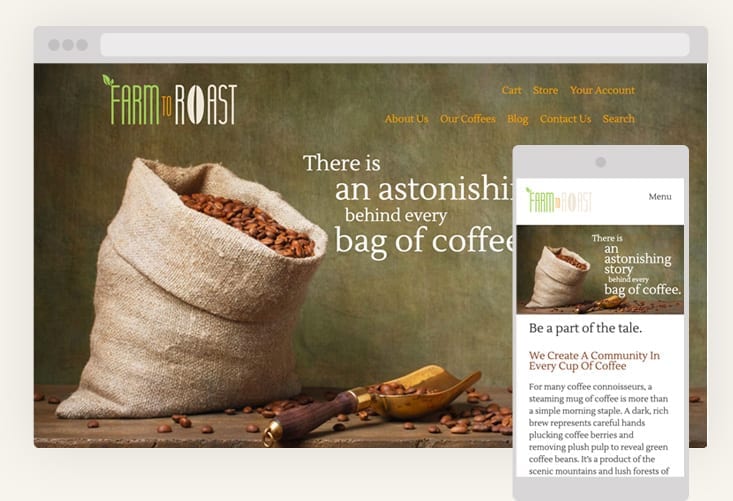 Screen resolution, pixel density, tilt angle, phone or tablet…these are all things that weren’t even a concern a couple of years ago. Now, with mobile usage rising more and more everyday and projected to overtake desktop usage just about the time we hit peak oil, it’s more important than ever to consider how your users will find you on mobile devices, and how they’ll react to your site once they do.

Designing for mobile isn’t just taking your website and cramming it to fit into a smaller screen. Depending on what your site is for, it can be a whole new ballpark with a whole new game being played inside. Consider this scenario…

You run a cafe that specializes in freshly baked cupcakes and the freshest coffee in town. Your desktop site tells people all about that, lets them buy gift cards online (you don’t sell your products online, we said “Teh freshest!” and you pride yourself on that), and read updates from your blog on what goes on in the kitchen, recipes, and the latest news from the region where you get your coffee beans.

That’s great! It sounds like you’re really on the ball about making your website a place where people will want to visit, and then turn into customers at some point.

Now imagine that Mindy Sue is out and about walking the streets with her iPhone. Suddenly she has a craving for a cupcake and a latte. Through good SEO, when she searches for coffee shop pittsburgh, you’re the first result. Wow, you’re really on top of things! But when Mindy Sue loads up your site, she can’t seem to find the address. Or the phone number. They’re buried away in some tiny link somewhere on the site which, with such a small device, is just too hard for her to find. In the meantime, she stumbles across Starbucks #48901-a and figures, “Oh well, this is good enough.” Chalk another one up to corporate chain density.

Now consider if your site had been optimized for mobile. The phone number and a link to Google Maps, where Mindy Sue could’ve easily gotten directions, could have been front and center. Perhaps you could display the brewing times and “fresh out of the oven” times when you last put on a pot of coffee or pulled some delicious Red Velvets out (all which could be updated with a quick text message from you, which would in turn update your website). Mindy Sue then would have known where you were, exactly how fresh your coffee really was, and been directly on her way over. You could’ve made it easy for her to update her Facebook status, and then her friends would have shown up, too. And Mindy Sue’s got over 2,000 friends on Facebook. You’d’ve sold out your whole stock and could’ve taken the weekend off!

Great ideas like this and more could all be coming your way, just get in touch with me so we can start bouncing them off of one another.