The Big Problem with Yelp! Advertising

I am writing this after much experience helping a client with his Yelp! account over the past several months.

Admittedly, I love Yelp! as a service to customers. I use it in tandem with Google Maps to find places to eat while my family and I travel, which we do full-time.

However, the business and advertising side of Yelp! is not only a lacking experience for the business owner, I believe they may also be practicing the art of deception.

The first issue arose when we were simply trying to merge two duplicate listings. Though I am listed as an owner on the account, an email from another owner was required. The entire reason I am on this project is because the business’ actual owner doesn’t like to mess around with email or Yelp! or anything else like this. Still, we played along and he sent them an email.

He sent another, and then another, all of which were ignored. Yelp! phone support told me they never received them, but I was CC’d on all, to my Gmail account, and they were all sent and received by me. After four phone calls and several additional emails, the accounts were finally merged.

I then began looking into the $500 / month the client was spending on Yelp! Ads. As a web designer who occasionally helps his clients with things like online advertising, I know that it’s important to know what the return on investment is for an ad. If a client is spending $500 / month, is that getting them 10 leads, 50 leads, or 500?

In Yelp!, there are tools to see how many leads were generated:

However, that information is also available to non-advertisers. A representative I spoke with on the phone told me that the numbers shown above were only for ad-generated leads, since this is an advertising account. However, I can see the same report in my own account: 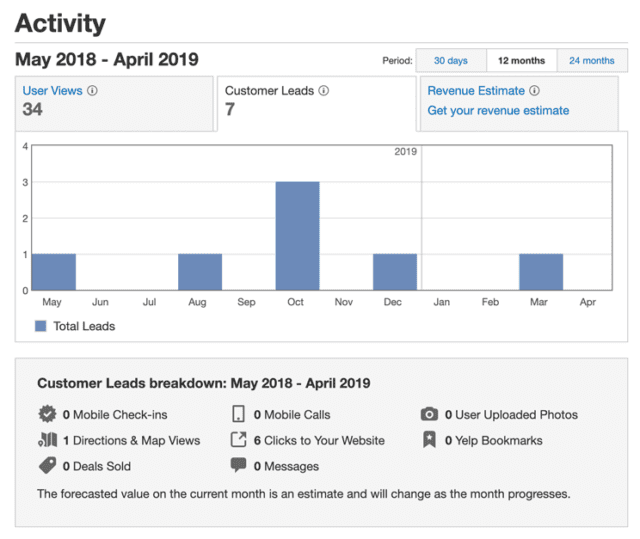 “But Nathan,” you say, “look at the difference in numbers!” Sure, they spend $500 / month so I would expect their numbers to be higher. I don’t put any attention into Yelp! and don’t spend a dime, so of course my numbers would be smaller. That’s not the point.

In the paid account, there is no way to know how many of those leads were organic vs. paid clicks on Yelp! Ads.

When I asked about this at one point, I was told to search for the business on Google. “See,” the rep said, “Yelp! is the number one result for [the search query].” I won’t share the query, as I’m not looking to identify any specific clients, but the concept that Yelp! is the number one result on Google for a client’s search query (they’re actually #3 for that query) having anything to do with Yelp! reporting seemed strange. When I mentioned this, the representative literally yelled at me, said I didn’t understand how the Internet works, and our conversation ended.

We decided to cancel our ads, merely as a way to compare the numbers. After 3 months we’d look at the reports and see how many leads were generated without ads and then compare them. This should be something you can do without cancelling an ad, but since that’s not possible with their reporting, it seemed the only avenue.

To cancel their ads, we had to wait 30 days. If he had created his contract after September 2017, he could cancel immediately, but since he’s been with them since 2008, there’s a 30 day wait time. He has spent well over $60,000 dollars with them, mind you. And they won’t let him cancel without getting that one last payment out of him.

The only positive experience I have walked away with here is that when I brought up the concept of seeing how many leads were organic versus paid, the latest customer rep replied, “That is an excellent idea. I’m going to make a note and see if that’s a possible feature we can implement in the future.”

As though me, a freelance web designer, was the first person to ever think of this.

Up Next: How to Get Certain Values from a Woocommerce Product