The Future of Pittsburgh Public Transportation

Peak Direction is a great blog all about public transit in Pittsburgh and it’s author, Brent, seems to keep on top of what’s happening in the area. For instance, did you know CMU is building an automated phone system to help finding a bus after Port Authority hours easier? Or that Port Authority has plans to build an automated fare system?

Of particular interest was this article from Pop City titled Transportation Key to World-Class Pittsburgh. I won’t reiterate the article here or anything, but it was a nice, light read that doesn’t mind throwing a little positive praise to Pittsburgh’s transit system and even the Port Authority themselves. What I did do, though, was expand on writer Chip Walter’s article though and make this little map of what a future light rail system in Pittsburgh might look like. (Click to view the full sized version.) 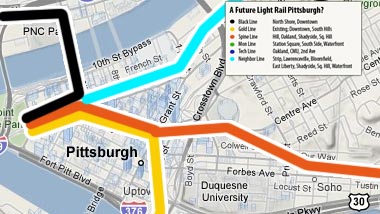 Now, I’m not claiming that this is the best idea or that it’s even feasible, but it covers most of what Chip was talking about in his article, which seems like a pretty solid basis, as well as an additional line up through the Strip which would then cross from Lawrenceville to the Waterfront (which is something the Port Authority rarely currently does, favoring lines that start or end Downtown.) I’ve tried to run the lines through or near central business corridors, particularly with attention to hospitals and colleges in the area.

Up Next: Pittsburgh Expands its Recycling Program