More on Politics: “Change” vs. Hillary

Following this week’s string of politically influenced posts, I thought I’d mention something of interest which I’d noticed while writing yesterday’s post about the Democratic Party’s website. Keep in mind that this isn’t the website of either of the party’s presidential candidates, but the entire party’s site.

Democrats seem to love splash pages, with both Obama and Hillary having a similar “Join us” message when first visiting their site, a theme which follows through the democrats.org. I couldn’t help but notice, however, that on the Democratic Party’s splash page they feature two squares: one for each of the main candidates right now. But if you look at the signage there you’ll notice that while Hillary’s campaign signs scream here name as the main piece of content, Barack’s favor the word “change”, with his name being completely absent from the signs themselves. 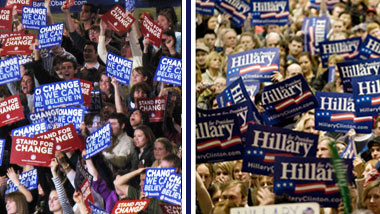 Now as to what this means, I have no idea. I suppose one could hypothesize that Barack is sending a message, stating what he believes in and what his mission is, while Hillary is attempting to gain name recognition. Conspirists might advance that thought to state that Barack is dedicated to improving the country and working for us, while Hillary is simply out to make a bigger name for herself. The former is rare for any politician, while the latter is the de facto standard in politics throughout all of time. To take it even further, you might think that the Democratic party as a whole would prefer to see Hillary in office, and have therefore removed Barack’s name from their splash page, though personally I would think this the least likely. And finally, it might simply just come down to one graphic designer’s preference over another. I stand corrected, that final theory is the least likely.

Of course, no one can know for sure except the privy few in each camp, but by all means, if you’ve got an opinion, do let me know in the comments.

Up Next: What is the Most Important Viewpoint Held by Each Political Party