I was working for a public television station when I first heard it mentioned.

“We need the whole page above the fold.”

I had absolutely no idea what they were talking about. Try as I did, I couldn’t manage to fold my computer screen in half. 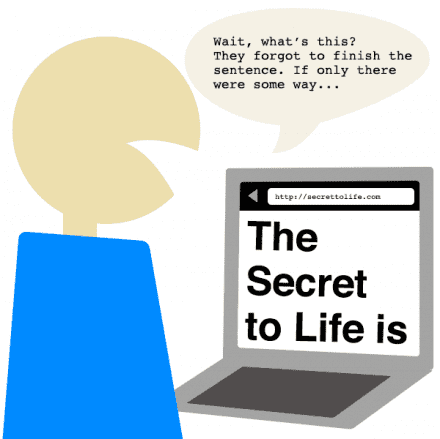 For those who don’t know, the “fold” is a throwback to the print world, newspapers specifically (you know, those things that are constantly shutting down because no one reads them, ie, they’re obsolete). It’s where the paper was folded in half to fit on the news stand. Needless to say, we don’t go around folding our computers in half, so in terms of web design, the fold is the point on the page where a user needs to begin scrolling. Some clients pitch a fit if you go below it.

Bob is a television set designer. He’s the one who determines where the coaxial cable will go, what radius the corners of the set itself will be, what colors the buttons will be, all of that good stuff. He’s designing a state-of-the-art flat panel television, meant to hang around nearly seamlessly on the walls of expensive yachts and Superbowl party living rooms. Bob puts everything together beautifully, then his boss comes in. Shit is about to hit the fan. The television has no knob to manually change the channel. Well, it has one, but it’s tucked away out of site. Bob’s boss tells him they need to think about television users who are afraid to use a remote. Bob kills his boss, burns down the office, and becomes a Taliban insurgent pledging to destroy the idiots populating America.

You see, Bob went crazy because he couldn’t live in a world where anyone actually thought something so stupid. Unfortunately, the exact same principle applies: everyone who has ever been on a computer has scrolled a page. After clicking a mouse button (or tapping a screen these days), it’s the second thing you ever do. Anyone who thinks otherwise is either fucking with you, or really has no business combining the muscles in their throat and mouth (or fingertips and keyboard) to create what we call words. 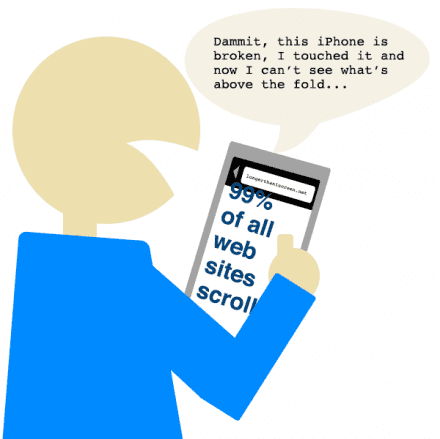 Don’t listen to me though, consider just about any given page on Apple’s website (Apple, for those of you who don’t know, are the folks who designed the iPhone, which is the device every other phone since has been created to try and be exactly like). They all scroll.

Thank you, we can now call this an end to the debate.