The cult smash hit prog rock band, Gosub 10, has just released its first record, String$=10; if String$=10 then Gosub 10. I’ve included some of the cover art below, along with some info about the upcoming DVD. 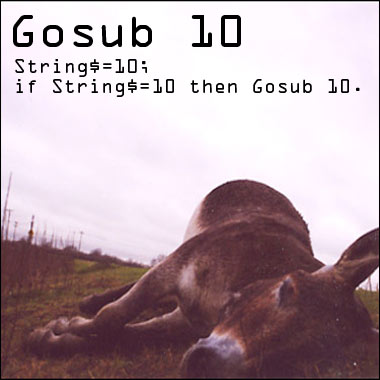 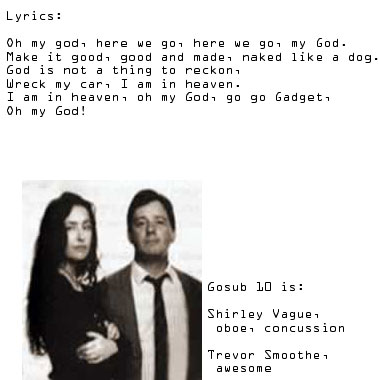 The band, formed today and already topping charts in places you’ve never been, is talking about releasing a DVD of their greatest hits, called Gosub 10; DVD$ = Too Good for VHS. They will also be appearing on Where are they now? and Shirley Vague, co-founding member, is going to be the voice of the new wacky cousin reportedly moving in with television’s The Simpsons to spice things up a bit. Unfortunately, there’s no word on whether or not George Bush looked like a complete idiot or just a bumbling fool on last Thursday’s debate, but the band is going to formally back Arnold Swartzenegger’s new movie, Gubernatorial Mayhem: The Hunt for Taking Me Serious. Thank you and good grief.

Up Next: Sunday Top Ten Awesomeness