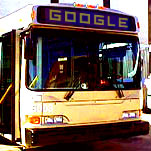 Boy was I happy when Google Transit decided to branch out from simply being a Portland thing to including a few other cities, including my own fine city of Pittsburgh, PA.

A few trips later I was not quite so impressed. Let me begin by saying that yes, it is definitely better than using the Port Authority’s Trip Planner, which has a bogged down interface and doesn’t recognize addresses, only intersections. However, while Google Transit understands addresses and often even just typing in building names or businesses or even general neighborhoods, that presents a problem in itself: bus drivers only understand intersections. So if you can’t give them an intersection, the poor bastards don’t know what to tell you and therefore typically respond with a “no.” Whatever that means.

But more importantly, Google Transit incorporates walking. But it doesn’t say “Go up Walnut, turn right on South Highland, and left on Penn.” it says “Go to insert destination street address“. Which is typically all fine and dandy, I’m not above asking people for directions or just generally knowing the city myself. However, sometimes this is a huge problem.

For example, check out this route Google Transit chose for me. I was trying to get to the Carnegie Science Center. Note my final walking instructions: Go to 1 Allegheny (takes about 7 minutes.)

Given that I’m supposed to swim across the Ohio, I wonder if 7 minutes is a reality? I’m a decent swimmer but…

Up Next: Google Add a Search