So I enjoyed, very much, watching Barack Obama give his speech last night. Now, don’t get me wrong, I love as much as the next guy the sweeping, dramatically colorized, superhero stance and big smile pictures of Obama, and if he were passing out Kool Aid, I’d gladly drink it, however — what I was mostly impressed with was the fact that he gave specifics as to what he planned to do while President. That’s something that I’d never heard George Bush, John Kerry or John McCain do. Anyone who can’t tell you exactly what they’re doing is probably either lacking a plan or dishonest. Ambiguity is the main weapon of the liar.

This is perhaps in direct conflict with those who believe that Obama will raise taxes, which he’s said he will, but on the small, super rich. Those people who have enough money that they could easily help the rest of us out by simply doing their share.

Tom Daschle: No oil would flow out of the Arctic National Wildlife Refuge for 10 years.

I’ve long thought that it was silly that doctors and lawyers made millions on millions for their professions, but teachers and professors paled in comparison, so anything that helps to bolster that profession is spectacular.

And his plan to rid ourselves of our dependence on foreign oil doesn’t involve drilling in Alaska, which industry experts claim could take as long as 10 years to have an effect on gas prices anyway. It’s time we started making cars and producing energy that is renewable right here in the United States.

Fox News is a Really Great and Unbiased TV Station

Have a look at the clip below. Note that they are not just making the statement, but that it is an alert! I’ve heard people say that NPR is a very liberal, left-leaning organization and how tragic that is. I listen to NPR every single day and can tell you that nothing is ever as ridiculously biased or nearly as sensational as this station. I can’t even stand to think that it exists, and I hope, truly hope, that these warmongering ratings whores are forced to lick hot tar out of a steaming pile of Rush Limbaugh’s ear wax for all of eternity when they die. No, seriously. 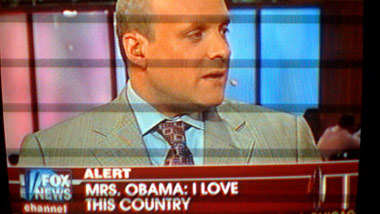 I love Reader and I love the sharing features it provides. I also think it’s pretty nifty that I can see what the candidates are subscribing to in Reader, except that…wait a minute, John McCain says he doesn’t even know how to use the Internet, so isn’t it a bit hard to believe that he’s gone from “learning to get online myself” to already using Google Reader? Doubtful. 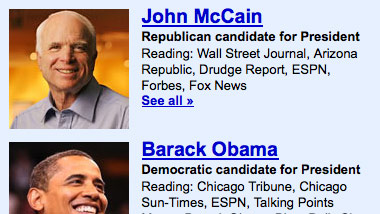 Even if it is true, John McCain subscribes to Fox News? WTfuck? I can understand, even if I loathe the idea, that a TV station purporting to be news would in fact be another soap opera/celebrity tabloid network…but that a candidate for the Presidency of the USA would be getting his news from that source is despicable.

Up Next: Why I switched back to Firefox