Today in Bisbee, AZ Air: thin, dry, high desert air that comes slinkying through the screens of our little mobile home on wheels. It’s hot, but not nearly too, and the perfection of this feeling in the middle of February — the way it makes your skin so content, the smell of it all — it’s all too reminiscent of my teenage summers spent in Nanty Glo, PA, riding skateboards, living off of chili dogs and sunflower seeds with pictures of Indians on them, dabbling in nicotine and kissing girls with braces. Ah, we felt so alive, so adult then, a feeling that as all people move into more of the traditional term of growing up begins to fade, so that most of us who are over 24 or so begin to imagine that teenagers are all just silly little kids with easily overcome problems. We have survived that tumultuous endeavor, the desperation of being trapped in a space that neither affords the freedom of adulthood decisions nor the majestic innocence surrounding being too young to care.

A wagon circle, like the buffalo or pioneering covered wagons once performed, surrounds us, this one made of RVs of every shape and size, shiny giant buses, dirty old motorhomes (such as our own), and illustrious Airstream trailers all coming together as though fearful of what coyotes or javanelas might crawl out of the night and attack our Internet connections, perhaps. 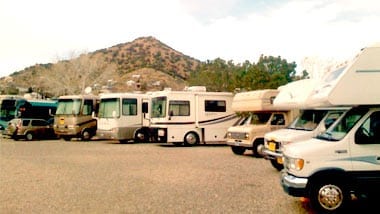 This is a world where anything is possible, and that is a 100% true, if illusive, fact. The world finds itself in a recession, but the idea that we’re somehow “receding” is a relative term. Yes, our economy, the number of pieces of paper we trade (these days without even needing the actual paper) for bits of plastic and oil, is not growing as perhaps the money makers and movers would like to see. But who deems it important for us to continue growing? Tyrannosaurus Rex grew phenomenally, and look what happened to him. Rome died because it became too large, unsustainable. And in a world where our ice caps are melting, where the very idea that we, as humans, are physically destroying something as large as a planet, wouldn’t it be reasonable to think that humanity might realize this trend, that growing is not particularly the best idea in the world?

Of course, we have all learned very well that only hippies, treehuggers, vegequeerians and flamingly homosexual liberals believe in the less-is-not-more-it’s-wonderfully-less theory. As a race we have overcome so much: the animal kingdom fears us even though we have no claws, sharp teeth or considerable muscle, we keep nature out of our homes, crush hills so that our offroad vehicles can more easily drive through them, and are now even overcoming the heavens, sending robots to do the work we don’t have to. When the pioneers were confronted with the threat of the Indian, they destroyed him. Buffalo in the way? Vanquished. They even murdered the very soil they used to feed themselves until nothing but dust was left to push them back.

These are all just the ramblings of an aging man, though, who lives in a trailer and pisses too many afternoons away drinking and cavorting with local riff raff in town here or city there. I don’t expect the world to give up it’s second houses, to replace it’s TV dinners with familial discussions, or to start planting it’s own gardens. I don’t expect that to happen at all, even if I think it might be a grand idea. Selfishness is a wonderful luxury I can afford, because I choose to have so few other debts to pay.

No, my point is simply that perhaps we are not in a recession at all, but simply a resetting. A built in mechanism that the grand scheming idea that is capitalism has evolved in order to make certain we don’t ever get too big, too quickly. Either way, it’s tea time, 2:20 in the Monday afternoon, and I’ve got some sun to soak up.

Up Next: Word on the Streets