I get Jason Rehmus’ RSS feed in my Google Reader. Honestly, I’m not entirely sure who he is or why his feed is in my reader, but it’s proven interesting enough to remain there for some time now. He posted a map of places he’s been. I love maps. So I made one, too. With a key, indicating how long I’ve stayed in those places. 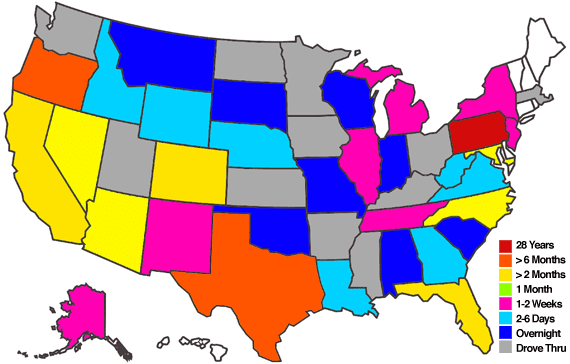 Aside from a quick jaunt to Boston one day, I’ve never managed to make it up to New England. Funny, as that’s the one place I probably most often talk about traveling to. Also, Delaware is going to be a hard one. If I’m back East, I usually want to travel West. If I ever go to New England, I can’t imagine Delaware will be on the way. Tough break, DE, but hey, you’ll always be the first state!

Up Next: AT&Too Early in the Morning